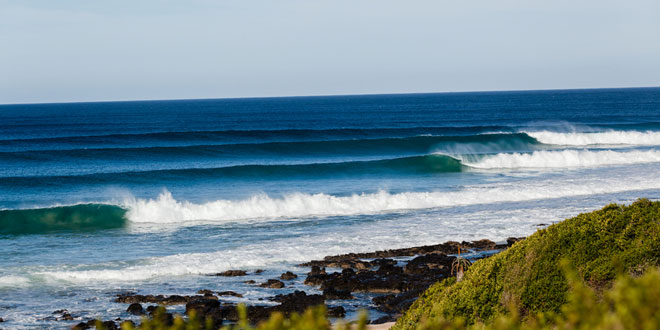 Posted by: South Africa Bloggers 19 April 2017 in Attractions and Places, Explore Our Cities Comments Off on Exploring Jeffreys Bay

It may be a small Eastern Cape coastal town with a population of less than 20 000 people, but Jeffreys Bay has gained popularity and respect all over the world for its awesome surfing beaches. In fact, it was one of the hosts for the internal Billabong Pro ASP World Tour challenge for many years, bringing surfers and their fans to this quiet retreat every winter. This challenge, which officially ended in 2011, took place at the famous surf-spot, Supertubes. During this time, the whole town came alive with cultural diversity.

The warm waters of the Indian Ocean roll gracefully onto kilometres of pristine beach sand, creating the ideal spot for a family vacation or a honeymoon. The permanent residents of Jeffrey’s comprise a melting pot of surfers, young families with local businesses, and retirees. This gives J-Bay a relaxed, laid-back feeling at any time of year. Still, the entire town is not very big, covering a total area of less than 12 square kilometres.

The beaches are all picturesque. However, those favoured amongst the surfers include Kitchen Windows, Supertubes and Surfers’ Point. Dolphin Beach was awarded a Blue Flag status, which requires that it adhere strictly to a number of criteria, including a permanent lifeguard on duty and a number of educational and environmental initiatives. This international award is rather important, lending its recipients a huge amount of acclaim and respect.

The waves are, characteristically, straight, long and hollow, and the swell impressive. Whether you are just learning to surf, teaching a little one the moves or a pro on the waves, there will be the perfect beach for you here.

Jeffrey’s Bay is only 80 kilometres from Port Elizabeth in Nelson Mandela Bay and about 40 kilometres from St Francis Bay. It is situated on the N2, just before the official Garden Route begins in Storms River, and has a host of attractions in and around it, making it a convenient central point from which to experience the wonders of the Eastern Cape.

Here are some of the attractions, activities and just plain ‘must-sees’ in and around Jeffrey’s Bay:

• The Shell Museum showcases some of the amazing, rare and pretty shells to be found along this expansive coastline. In addition, ornaments and goodies for the home are made using these shells, allowing you to preserve their beauty and making for fabulous keepsakes.

• Visit the African Dawn Wildlife Sanctuary, which is a rehabilitation facility for birds that have been abused, neglected or badly injured. There is such an array of birdlife here that it is best to bring along your barbecue or picnic goods and enjoy the better part of a day amongst the array of parrots, eagles, sunbirds, blue cranes, Knysna Loeries and even ostriches.

• Enjoy an authentic South African seafood extravaganza at Die Walskipper. Guests are seated on the sea sand of the beach and delicious meals are served in rustic crockery. This is the perfect way to spend a warm summer’s evening with friends and family.

• Find out about how Jeffrey’s Bay earned its acclaim amongst surfers at the Jeffrey’s Bay Surf Museum. This documents a fascinating history of how the sea has always had an irresistible allure for mankind and how this sport developed over the generations.

Towns that require a bit of a drive but are within the vicinity include Oyster Bay, Cape St Francis and St Francis Bay, the quaint town of Humansdorp and, of course, the metropolis of Port Elizabeth.