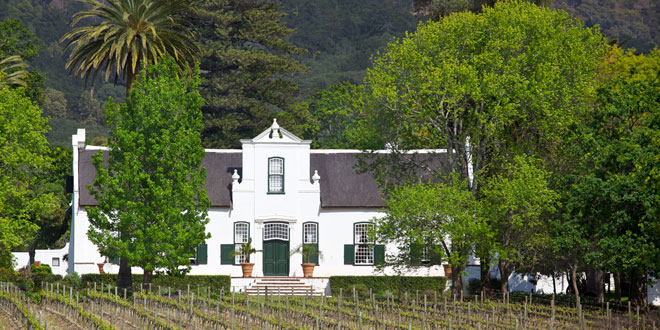 Posted by: South Africa Bloggers 25 December 2013 in Attractions and Places Comments Off on Exploring Constantia

The verdant suburb of Constantia is Cape Town’s own little wineland, characterised by rolling hills and deep valleys, all occupied by rows and rows of fertile vineyards. Still, it is a residential suburb, occupied by beautiful homes, some of which are the original farm houses of yesteryear. It is about 15 kilometres from the City Bowl and popular areas for holiday accommodation in Cape Town (see here), Table Mountain and the V&A Waterfront.

It is situated in the very heart of the Peninsula, and the Constantia Valley is flanked by the Table Mountain National Park, which is one of the world’s best known Heritage Sites. The whole of Constantia is nestled in the foothills of the Constantiaberg Mountain and the valley below, making for breath-taking views from just about anywhere.

Constantia has a long history, acclaimed as one of the oldest suburbs in the Mother City. It hosted political exiles during the 1600’s and, towards the end of that century, the Dutch began to settle here and establish homes and vineyards. In 1684, it was formally established by Simon van der Stel, the Dutch Colonial Governor of Cape Town at the time. The first wine farm in Constantia was Steenberg, which was established in 1682. This was followed by Buitenverwachting, Constantia Uitsig and Klein Constantia. These wine farms are still producing world-class wines, thanks to the ideal soil conditions and the climate. Other popular wine farms in the area include Eagles’ Nest and Groot Constantia. Visiting and touring these farms allows you to taste the wines, see the cellars and learn more about the wine-making process. Purchase wines direct from the vineyards at reasonable prices, as these make for excellent gifts for friends and family back home. The Constantia Wine Route showcases the best of these estates and makes for a day of picturesque landscapes and delicious food and wine.

Constantia has been the residential address of a number of well-known personalities. These include Mark Thatcher, Charles Spencer and, for a while, the late Nelson Mandela, former president of South Africa.

Constantia Nek is a route that leads from this scenic suburb, over the beautiful mountains and into Hout Bay on the other side.

The Kirstenbosch Botanical Gardens are only 10 to 15 minutes’ drive away. These gardens boast some of the most beautiful trees, succulents, flowers and herbs that there is to offer in South Africa. There are several walking and hiking trails through the gardens, which take visitors right up the slopes of the mountains and deep into the spectacular flora that defines the landscape of the country.

There is a luxurious lifestyle that permeates every aspect of Constantia, its activities and the many attractions of Constantia. It is simultaneously bursting with things to do and see, and a relaxed retreat from the hustle and bustle of the city life of Cape Town.

Previous: 5 Things to Do in Bloemfontein
Next: What Sandton has to Offer