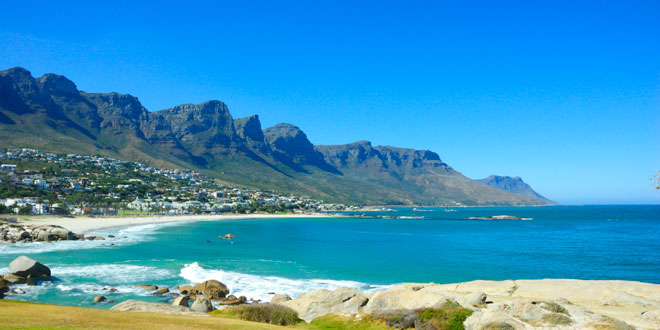 Posted by: South Africa Bloggers 23 April 2017 in Attractions and Places, Explore Our Cities Comments Off on Exploring Camps Bay

Cape Town, also known as the Mother City, is the cultural epicentre of South Africa. It is as beautiful as it is diverse, and it is this unique combination that has earned Cape Town its renowned reputation of being one of the best tourist destinations in the world. Camps Bay is known for its luxurious mansions, its extensive beaches with chilly turquoise water and its main road, flanked with trendy champagne bars and chic restaurants.

Camps Bay Beach is fairly large, and is always speckled with locals and tourists that have come to enjoy the warm white sand and cool waters. Little ones will love the rock pools and enormous boulders, which never seem to lose their appeal. These boulders also create private little nooks for those wanting to escape the other bathers. The beach is lined with palm trees, giving it a particularly distinct holiday vibe. The beach was awarded Blue Flag status in 2008. Umbrellas and lounging chairs are available to hire.

Camps Bay occupies the back of Table Mountain, known as the Twelve Apostles. This magnificent mountain looms over the suburb and beach below, giving even the swankiest Camps Bay venues an authentically African twist.

Cape Town is known for its beautiful weather. Summers are hot, clear and dry, while autumn and spring are temperate and comfortable. Winter is cold and wet and travellers wanting a beach holiday should avoid travelling to Camps Bay and Cape Town between July and August.

There are too many restaurants and entertainment hotspots along the main road (Victoria Road) of Camps Bay to mention. Be assured, though, that there is no shortage of variety, world-class flavours and very special views to accompany them. It is this diversity that has lured a motley combination of families, honeymooning couples, retired residents and international celebrities.

During your time in Camps Bay, the following sights and activities are recommended:

• See Camps Bay from the heady heights of Table Mountain. A modern revolving cable car takes travellers all the way to the iconic flat top, where they can stroll around and get a 360-degree view of the Mother City.

• The Cape Winelands surround and include Cape Town. In fact, this entire region is world-renowned for its outstanding wines. During your time in Camps Bay, it is recommended that you visit some of the surrounding wine farms and enjoy a wine tasting.

• The Victoria & Alfred Waterfront is one of Cape Town’s most loved hubs for shopping, eating and enjoying the culture of this city.

• Robben Island and its prison have become famous for having been where former-president Nelson Mandela was incarcerated. Ferries depart from the V&A Waterfront and take guests on a scenic trip across the ocean to the island, where regular tours are conducted of the prison and the island.

• Long Street is situated in the City Bowl and is flanked by boutiques, galleries, designer label stores, arts, crafts and an array of restaurants. It’s a hop and a skip away from Camps Bay, so should be on your itinerary!